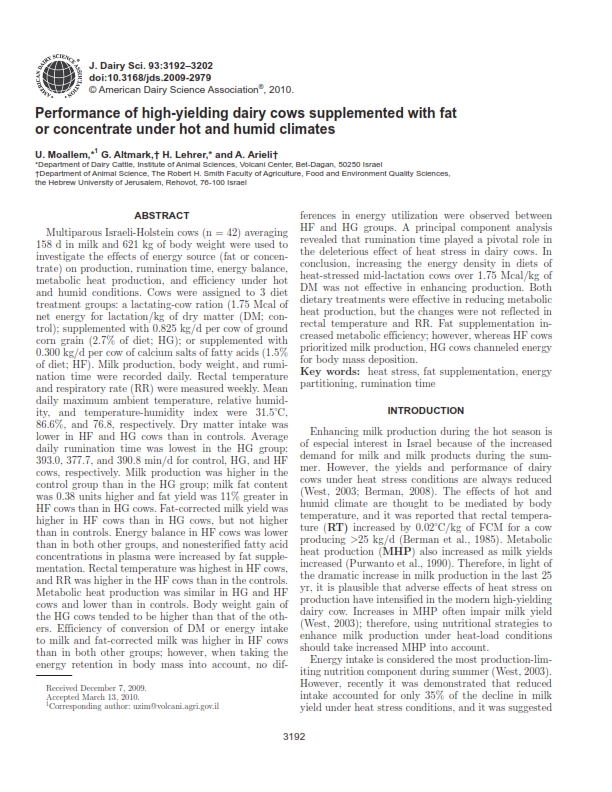 Name: Performance of high-yielding dairy cows supplemented with fat or concentrate under hot and humid climates

Abstract: Multiparous Israeli-Holstein cows (n = 42) averaging 158 d in milk and 621 kg of body weight were used to investigate the effects of energy source (fat or concentrate) on production, rumination time, energy balance, metabolic heat production, and efficiency under hot and humid conditions. Cows were assigned to 3 diet treatment groups: a lactating-cow ration (1.75 Mcal of net energy for lactation/kg of dry matter (DM; control); supplemented with 0.825 kg/d per cow of ground corn grain (2.7% of diet; HG); or supplemented with 0.300 kg/d per cow of calcium salts of fatty acids (1.5% of diet; HF). Milk production, body weight, and rumination time were recorded daily. Rectal temperature and respiratory rate (RR) were measured weekly. Mean daily maximum ambient temperature, relative humidity, and temperature-humidity index were 31.5°C, 86.6%, and 76.8, respectively. Dry matter intake was lower in HF and HG cows than in controls. Average daily rumination time was lowest in the HG group: 393.0, 377.7, and 390.8 min/d for control, HG, and HF cows, respectively. Milk production was higher in the control group than in the HG group; milk fat content was 0.38 units higher and fat yield was 11% greater in HF cows than in HG cows. Fat-corrected milk yield was higher in HF cows than in HG cows, but not higher than in controls. Energy balance in HF cows was lower than in both other groups, and nonesterified fatty acid concentrations in plasma were increased by fat supplementation. Rectal temperature was highest in HF cows, and RR was higher in the HF cows than in the controls. Metabolic heat production was similar in HG and HF cows and lower than in controls. Body weight gain of the HG cows tended to be higher than that of the others. Efficiency of conversion of DM or energy intake to milk and fat-corrected milk was higher in HF cows than in both other groups; however, when taking the energy retention in body mass into account, no differences in energy utilization were observed between HF and HG groups. A principal component analysis revealed that rumination time played a pivotal role in the deleterious effect of heat stress in dairy cows. In conclusion, increasing the energy density in diets of heat-stressed mid-lactation cows over 1.75 Mcal/kg of DM was not effective in enhancing production. Both dietary treatments were effective in reducing metabolic heat production, but the changes were not reflected in rectal temperature and RR. Fat supplementation increased metabolic efficiency; however, whereas HF cows prioritized milk production, HG cows channeled energy for body mass deposition.